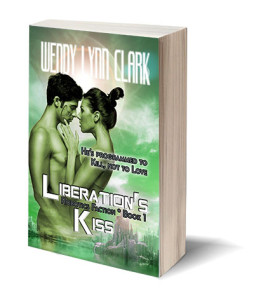 Before Liberation’s Kiss was a twinkle in my brain cells, I enjoyed the military science fiction novel Andromeda’s Fall. It’s about a high society woman whose family runs afoul of political powers and she discovers new strength as a kick-ass member of the futuristic French Foreign Legion. As one of the last survivors of her important family, she is hunted by androids employed by the political rivals. Ironically, her family was the very ones who created the androids, and she has plenty of fight to give them (when she is not being a mercenary for the Legion, of course).

I really enjoyed this book. You can read my full review on GoodReads.

One of the things I couldn’t get out of my mind was the intriguing inhumanity of the androids. They are an important but minor plot point, at least in this first book. I got an almost “uncanny valley” feeling from them, which is a great accomplishment in a written medium, and it worked to emphasize both their similarities and differences to the human charactres. There is a part when an entirely inhuman android requests not to be shut down, and a human soldier tells it, “Welcome to how the rest of us feel, buddy” before pulling the plug. And it really got me to thinking about desire.

Human desires. Android desires. The universal desire to live longer and not to be shut down.

As I was doing regular training jogs for a half marathon last summer, and I suddenly had several hours a week of free mental space on my hands while my legs were in motion, a story about androids and desires began to form. It was about a high society woman sought by a mysterious Robotics Faction, the android sent to kill her, and an agent that gives the android free will to choose his own destiny.

That story has since become Liberation’s Kiss, book one in the Robotics Faction series.