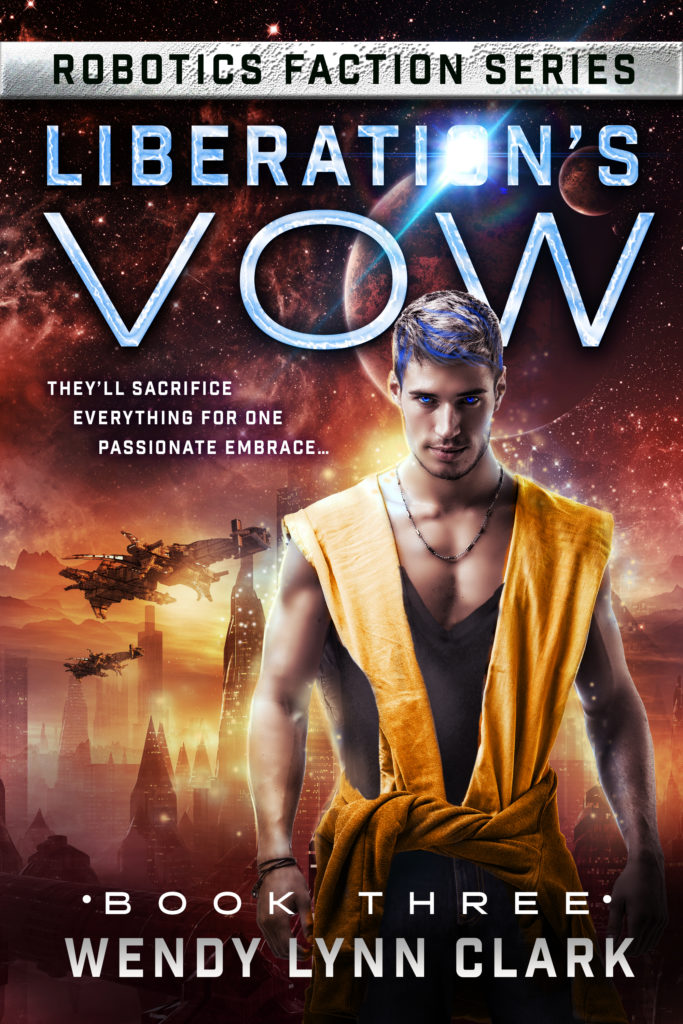 He wants redemption. She’s using him as bait. They’ll sacrifice everything for one passionate embrace…

Aris is tortured by his past. The regional governor and aristocrat once traded his half-sisters’ lives for power. Seeking to redeem himself, he makes a deal with a shady agent that could get him killed.

Resa is a zero-class assassin. Her predecessor was a murderous nightmare, and she has no choice but to fill those bloody shoes. She attempts to infiltrate Aris’ life to draw out the android-corrupting rogue agent. The mission reveals forbidden desires that change everything.

Aris is using Resa too, but similar feelings cloud his judgment. With their passion unleashed, a secret may be revealed: the real reason the Antiata family has been sentenced to death. Resa and Aris are the only ones who can stop a human-robot war that destroys all worlds forever.

Liberation’s Vow is the third book in a series of sci-fi romances, and it can be read as a stand-alone. If you like android assassins, creative world-building, and sizzling chemistry, then you’ll love Wendy Lynn Clark’s latest roller coaster romance.

“The intergalactic criminal rogue has driven robots insane,” she said, her head still pressed against the wall. “An insane robot is a danger to everyone. Give me her location to capture the criminal before more are hurt.”

“Nice words. But you’re here to kill me.”

A brow raised. He winced and touched the bloodied scratch.

“I’ve always had a weakness for pretty girls.”

Somehow, this tossed-off compliment affected her more deeply than his declaration of her beauty. “Pretty” sounded closer to truth. The realization burned through her like the flickering of a match, burning into her center and stealing her breath. He thought she was pretty, and she liked him for thinking so. Danger. Danger. The word chanted in her head.

Be pretty. Use his weakness to extract information. Your untrained human persona is perfect for this chore.

“I am not a pretty girl,” she said, deliberately crushing her robot’s new idea. “And I’m not the organizer of the attempt to assassinate you just now.”

His non-reaction said he was already aware. “That doesn’t mean I’m safe around you, Zenya.”

“Since you know about my predecessor, then you also know I could have killed you at any time simply by not acting. Instead, I have saved your life.”

He licked his lips. “Because you need me.”

“That irritates you,” he observed.

She dropped all emotion from her body, squeezing it out like a liquid until nothing but the robot remained. And still, she felt like he could see her. See the empty shell, know that it was empty, and sense a challenge to fill it up again. “I don’t need anything.”

“Sure.” He squared his jaw. “The lady rogue knows you’re coming. The only way you could possibly hope to catch her is to stay close to me. I’ll let you stay as close as you like. For a price.”

Pay it, her robot ordered.

She shivered. “You do have a death wish.”

“Are you going to kill me?”

How interesting that he drew a distinction between her assignment and her intention. “Why do you think I will tell you the truth?”

“Because I already know the truth.” He coughed. “I’m testing to see whether you’re going to bother to lie.”