I was so excited about this book! Vikings in space?! They reconstructed a whole world according to Viking lore and even have “unicorns” and “dragons,” alien fauna that happen to conform to Earth ideals(?). But like these mysterious fauna that are mentioned but never actually seen, the idea of this book is way more awesome than the actual story.

The heroine is a young officer on a trade negotiation mission to the Viking world. The hero is a divorced prince/scientist who wants to ensure that the negotiations get the medicine (?) their world needs without opening them up to Earth exploitation (?). If they give in to their mutual attraction, both king and military will be pissed (?). And if the heroine decides to follow her heart and marry the prince, she will have to give up her promising military career (?) to stay on the Viking world.

Notice the number of question marks in the previous paragraphs? Yes. I spent most of this book being confused.

It’s excellent writing. But it oddly felt like “Book Five” or something, where all the information has already been shared, and the reader already ought to know what’s going on. (view spoiler)[ Like, we should already know that people on the Viking world are suffering from a strange illness that only Earth medicine can cure. Otherwise, if they can travel star systems, why can’t they fabricate drugs? Seriously. Never explained.

The hero thinks that if he shows the heroine the rustic village where his friends live, then she will “understand” and prevent exploitation. …Exactly who is trying to exploit what? Okay, he doesn’t want a way of life turned into a tourist trap. How is taking his girlfriend to see it as a tourist going to save that from happening? Her place on the mission is never actually explained.

The sex was also all disjointed and weird. They share a sexy kiss, then decide to stop. But the kiss was captured on camera, so they text each other surreptitiously instead and the heroine uses a fancy massage oil gift from the hero to get herself off. But the hero can’t contain himself and comes over for a visit. But then he can contain himself, and takes off before he gives in to have sex with her. Later, after a mysterious amount of time passes, he shows up so they can fight. Then he carries her off to have sex. This causes an international incident when her CO shows up to berate her public bad behavior. The hero then asks her to marry him, and she forgets that she ever wanted a career and happily accepts. They have sex on a pile of presents, the only Viking tradition that is actually described in great detail.

The other thing that bothered me about the whole book is that, like the unicorns and dragons, the scenes end *right before the good part* or skip that good part entirely. So there is a naked welcome banquet, and when it starts, the hero and heroine walk outside. They walk out! To a quiet garden, just like any other garden in the whole universe, while a Viking naked orgy is happening in the other room! Later, a big deal is made about this sexy massage oil, and then the hero skates out before anything too sexy happens. And later, the heroine absolutely has to try out rustic village living…and it skips to two weeks later, where she’s perfectly acclimated to wearing her hair down and hauling buckets of firewood.

I bet this author is great with sports romance or contemporary. I can’t read another Zoe York sf because I will drop dead of disappointment.

5 stars for ability to write, 1 star for confused plot and skipping all the good parts = 3 stars.

View all my reviews

Start the weekend with a science-fiction romance! And did I mention it’s free? Click the cover to get it from Amazon!

Start the weekend with a fun, action-packed, science-fiction romance! And did I mention it’s free?

Start the weekend with a cyborg science-fiction romance. And did I mention it’s free? Click the cover to get it from Amazon!

My week has passed  –  June 22nd (Androids and Aliens). I hope you enjoyed learning about pink flamingos and edible hair dye! Meanwhile, there are still other weeks you can visit themed blogs, enter the week’s contests for books + gift cards + swag, and win!

Here was the “menu” for my week: 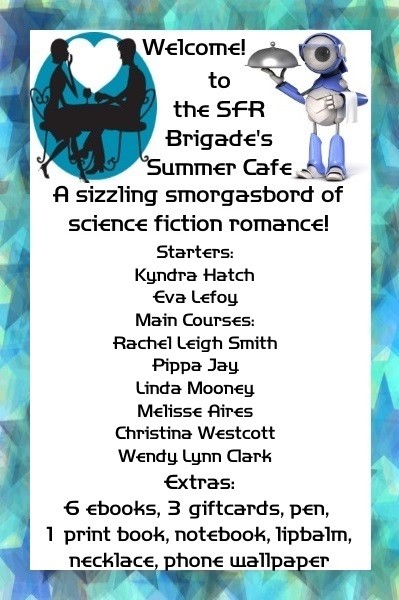 “Starters” are short stories and novellas, “Main Courses” are novels, and “Extras” are the things you can win that week. Good luck, and thanks for participating!

Start the weekend with a fun, action-packed, science-fiction romance! And did I mention it’s free? Click the cover to get it from Amazon!

I highly recommend this one. Read it now and check out my review this Sunday and see if you agree!