“We are under attack.”

The statement cracked across the star chamber like a stun-shot to the brain.

Ruling CEO of the intergalactic Antiata Family conglomerate leaned across his onyx desk. “The only question is, who is our attacker?”

Two representatives of the most important subfamilies shifted uncomfortably in their floating seats. Untouched chalices of coffee-vodka swirled, black mixed with silver, on gem-encrusted coasters.

When private meetings were called, someone died. Or worse, they lost their family seats.

He narrowed his gaze on the first representative. “Deterrence?”

Blade-sharp Chen rested an ankle across her taut knee. “None of our military campaigns affect the main families.”

“And yet, someone permanently erased the resurrection data of Cressida Sarit Antiata and her younger sister, Mercury.”

The other representative, Oleron of the Antiata Entertainment Proxy, fidgeted with his gold oculars.

“And Mercury’s occurred this morning.”

The ruler flicked to the entertainer. “Amusing?”

All the blood drained from Oleron’s face. “Not at all.”

“I thought—uh—well, losing the second kid’s just careless. After the first kid, they should’ve moved their data to a secure facility.”

“Tell him,” the ruler ordered.

“At 3:47 Old Empire time, Mercury Sarit Antiata’s data was erased from the Chen family repository.” Chen’s taut mouth clipped her words. “Her identity had been changed to mask her family connection. She is currently alive and well hidden.”

“What about Cressida?” Oleron asked.

“Two weeks ago, the moon Cressida had fled to was bombed. Her current whereabouts are unknown.”

“Cressida was twenty-six, real age, when she disappeared.” The ruler steepled his hands. A holographic tattoo of the Antiata family crest, a stylized fist erupting a sun, glimmered across his knuckles. “Her accused assassins have never been investigated.”

A muscle in Chen’s jaw flexed. “That is because her parents accused the Robotics Faction.”

The ruler raised both brows. “Another small joke?”

“I was just wondering who they accused in the Robotics Faction. Their light switches or the bed thermostat?”

“The data is missing,” the ruler said. “If you have a viable alternate theory, I will give you Chen’s family seat.”

Oleron drummed his fingers on his bouncing knees.

“Check it.” Oleron leaned forward, one hand leaving an oily print on the desk. “They sold off her spot for a few credits and lied to get a new one.”

“Sales leave a record. And someone else’s data would be in the resurrection facility. Instead…” He dropped Chen’s full coffee into the reprocessor. It disassembled the chalice to molecular components in a silent puff. “Both are simply gone. As if they never existed.”

The ruler fixed on him. “Try again.”

“They, uh, crossed a local mafioso, he bombed the regional depot, and poof, no data.”

“A local mafioso somehow amassed the firepower to cause a sub-planetary implosion?” The ruler marveled. “I sense the plot of a holo.”

The ruler slammed his palms on the desk. Oleron jumped, spilling scalding coffee across his lap.

“We have lost two family members with no explanation!”

“Extricating ourselves from Faction technology would be inconvenient.” He reprocessed another coffee mixed with silver ice vodka. The two colors, separated by a barrier of Faction-made nano-particles, created intricate patterns in the goblet. “However, I also don’t intend to wake up and find my light switch trying to kill me. Oleron.”

He straightened, nodding with relief and already transmitting the orders to his most creative staff.

“Chen. Where do we compete with the Faction?”

She shook her head. Her short black hair slicked back neatly against the buzzed sides. “During campaigns, we fight their soldiers or drones. As often, we lease them for our own use.”

“We don’t fight over any resources? None at all?”

“They do not require food, water, or even a constant supply of oxygen. There is no conflict.”

“Cressida and Mercury would disagree.” He sipped his shot. “We need to find out why. I assume you have warned the remaining sister about her imminent danger.”

“A courier will arrive at her secret location within the hour.”

“You’ve sent a courier directly from the site of her data loss to her hidden physical location?” The ruler flexed his knuckles, shimmering the family crest. “How helpful for the assassins trying to kill her.”

I have a cover for the sequel! Liberation’s Desire features sister Mercury and the sexy android assassin Yves|Santiago. What do you think? 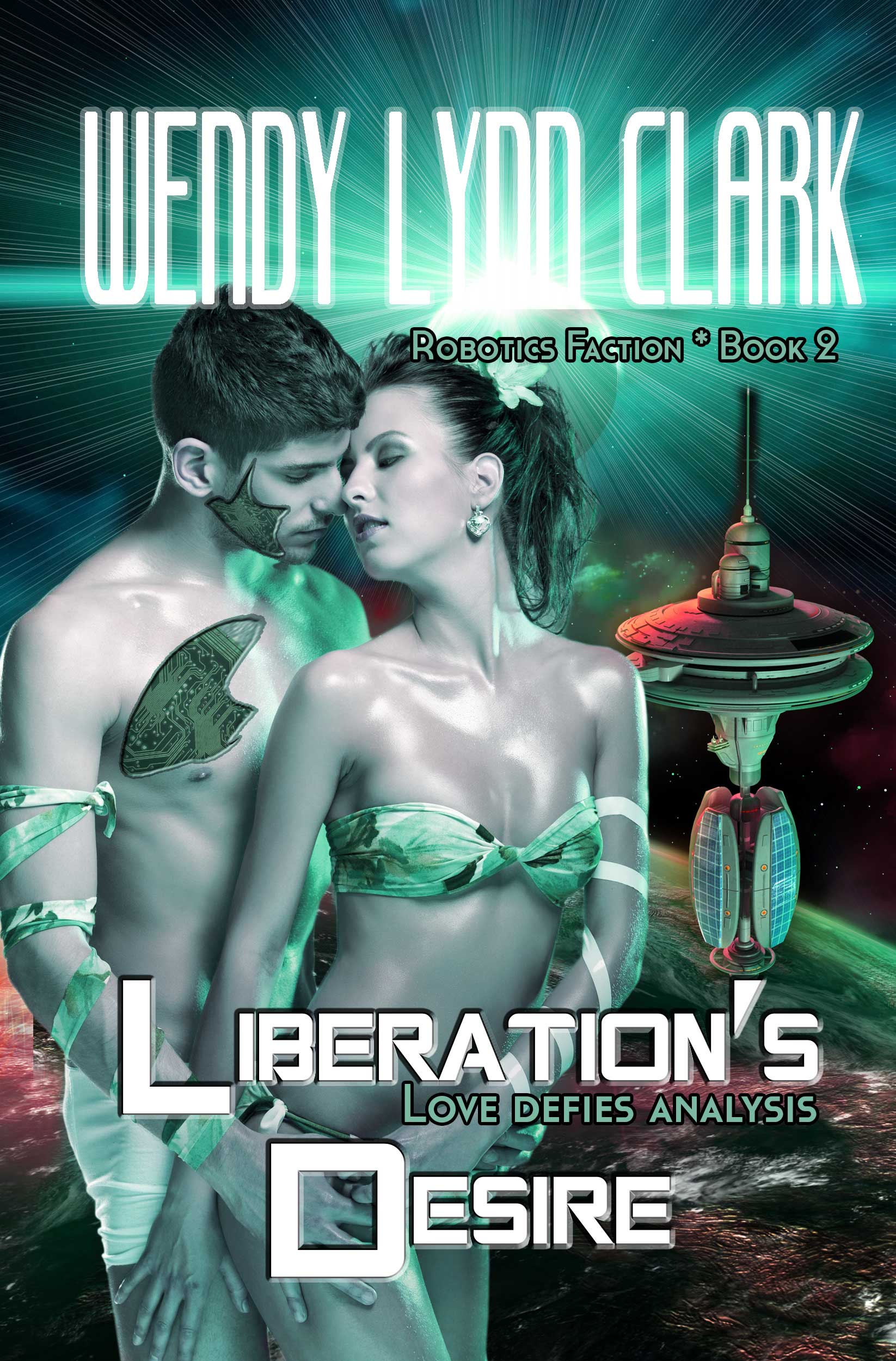