Empire of Sand – Kingdom of Monsters

New chapters posted on Tuesdays and Fridays until February 2017.

A story by W. L. Clark is a sweeping epic, in a dark world on the edge of science fiction and fantasy, burning with a solid core of hope. Adventurous and definitely not gritty, the heroes and heroines of these tales face difficult decisions while trying to remain true to their senses of what is right. These complex tales feature nuanced protagonists, the promise that good can win in the end, and the belief we are strongest when we do not stand alone.

Here are the critical elements:

Books in the Series 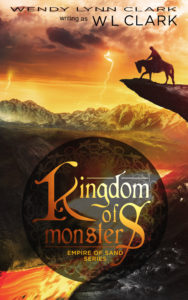